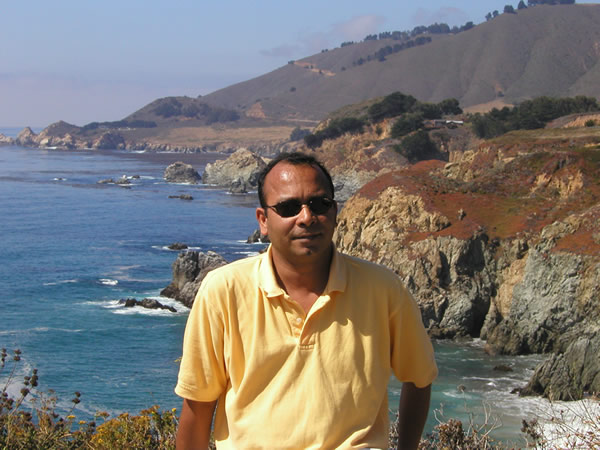 I am a Professor in the Physics department at the University of California at San Diego. My research is in the field of Experimental Particle Physics.

I came to UCSD in March 1995, after five years as a post-doctoral fellow on the ALEPH experiment at CERN.  In electron-positron collision near the Z boson mass (91 Billion electron Volts) , I discovered two new sub-atomic particles  made of the beauty quark. The meson I discovered is called the Bs because it is composed of the beauty and strange (anti)quarks. The discovery of this particle was crucial to the study of the asymmetry between matter and anti-matter.  The Lambda-b baryon I discovered is a heavy cousin of the proton but with a mass five times larger.

My group at UCSD played a major role in the discovery of CP violation in the decay of neutral B mesons with the BaBar detector at SLAC. My student Shahram Rahatlou recieved the American Physical Society's Tanaka award for the best Ph.D thesis in Experimental Particle Physics for 2004.

I have been deeply involved in the hunt for the Higgs boson at the Large Hadron Collider with the CMS detector. During 2010-11, the formative years of the chase, I was the Higgs search coordinator of the CMS collaboration. Here is a CERN video in which I explain what we found in the 2011 data. The new particle discovered on 4th July 2012, with a mass of about 125 GeV, is begining to look a lot like the Higgs boson of the Standard model.

Here is a New York Times article chronicling the hunt for the Higgs as it unfolded. Watch me in The Higgs for me video produced by CERN when we were on the threshold of Higgs discovery.

Celebrating five years of Higgs discovery at EPS in Venice

About Me My Research Awards and Citations My Research Papers The Higgs hunt Recent Talks Why Study Physics ? Teaching At UCSD Read These Wonderful San Diego! What I Like